Neglecting to consider Human-computer Interaction (HCI) and touch interaction behaviors when designing mLearning can actually lead to missed learning opportunities if users are subjected to poor interface and interaction design decisions. While high-quality content and instructional design are important, clean graphics and visual design help attract learners to interact with the interface and content. Fortunately, for the most part users are at the mercy of the mobile device manufacturers and operating systems (OS). They have already made many of the inherent user interface design decisions for apps to work within their mobile OS. However, there is still some responsibility for graphic design and interface elements in mLearning, leaving room for error, and even more so if mobile user behaviors are also not taken into consideration or tested for in advance.

Past research on mobile behaviors focused primarily on smartphones while educators and instructional designers have directed much of their focus to delivering mobile learning on tablets without a deep understanding of the ergonomics and behaviors of use. A 2014 report from the E-Learning Guild titled, “Making mLearning Usable: How We Use Mobile Devices” revealed how people hold and when they use mobile devices. The survey revealed the way people use smartphones and large tablets are substantially different. People use phones almost entirely in several possible hand combinations, and largely on the move while standing or walking. People use tablets much more often while sitting, and with the device in a stand, attached to a keyboard, or set on a table. Users also often change the way they hold their smartphone or tablet, switching from one to two hands and changing the orientation different for typing vs. reading. These findings have huge implications for readability and mLearning design.

Figure 1: A tablet on a surface is much further from the user than smartphone in the hand so text and graphics must be much larger. Illustration by Steven Hoober, 2014.

These findings also points to the fact that the larger tablets with 9–11 inch screens are being used very similarly to laptops. In addition, the wide range of hand combinations when using smartphones is further increased if left-handed vs. right-handed use is taken into consideration. These insights reinforce the importance of HCI and learner-centered design considerations in a mLearning design strategy. 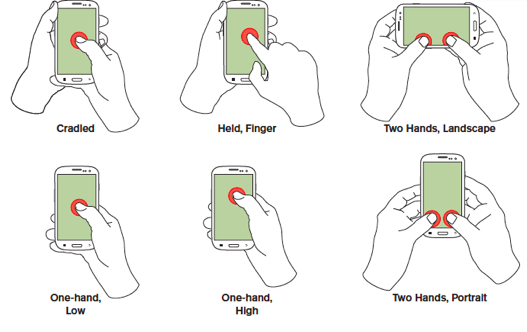 Figure 2: The way we hold our mobile devices. Illustration by Steven Hoober, 2014

It may not be possible to address all of the attributes of both tablets and smartphones without encountering a substantial amount of distinct differences such as accommodating user interaction preferences, screen sizes, and user behaviors. These differences alone would require exponentially complex considerations for each device type and form factor. Therefore, it is imperative that organizations wisely decide on which devices should be part of their mobile strategy. This decision should be informed by their learners’ behaviors, and also by their access to and expectations of mobile technology.